Hello amigos y amigas! Miss Lopez here. I still have aphonia today so I am taking it with work easy today. Good with blogging and social networking on internet to cheer me up! My friend and Swedish royal baker from Germany in the video just sent me this to you. I must say I have never met him, (he found my blog, Miss Lopez´s blog and then contacted me, cool!) but I´d like as he seems really nice and easy person. So sweet of him! And he likes Miss Lopez´s blog too! Nice! I hope one day I can try this famous royal cake he did when Princess Victoria of Sweden got married.
The thing is, this video with Koerffer in action is in German and I can not German. Is there someone out there who can help me with the translation so I can understand what he is saynig? Please… 🙂
Whatever! This cake do not need translation to make you Feelgood!
Have a nice day and Viva Sweet men 🙂 too that like the spirit of Feelgood Womanhood!

Hello Everybody!. A few days ago, I have got an e mail from Günther Koerffer, the Swedish Royal Family baker telling me he likes my blog and even  in Madrid did know about it. I think this is the great thing of having a blog, you get in contact with so many interesting people from all over the world!. Günther Koerffer has sent me the recipe of the Princess Victoria wedding cake and now that even Penelope Cruz has got married (in secret at the Bahamas), it is time for me to share it..Well you will find it in swedish but I am sure you can translate it with google. This prestigious baker from Germany originally together with four more bakers in Sweden had the  mission to bake the wedding cake for Crown Princess Victoria and Daniel Westling Wedding.
Here you see the Princess Victoria wedding cake at the Royal Palace in Sweden. I dedicate this recipe to all who are thinking of sharing their lives together, for LOVE!
And now I have the pleasure to share it with you!. Here comes the recipe:
pastelreceta
Enjoy the propably world´s best wedding cake and Feelgood !

Now time for royal honeymoon!. The trip of Princess Victoria and Prince Daniel for their honeymoon had been planned for months and the Royal House in Sweden has done everything possible to keep the secret until the last minute. The Swedish media have speculated for some time with the possible destination of the honeymoon and Brazil, where the Queen Silvia spent her childhood, was shuffled as one of the options.
Maybe,  maybe…
Enjoy a beautiful destination like Brasil you too and Feelgood
// <![CDATA[
var uri = 'http://impse.tradedoubler.com/imp?type(js)g(18446600)a(1689502)' + new String (Math.random()).substring (2, 11);
document.write('’);
// ]]>

Hi there!. Glamour for everybody!. After the wedding now it is time to enjoy the royal pictures. Royal Wedding on the covers of magazines worldwide.  A fairy tale comes true…This shows we people need glamour sometimes!
Like The magazine HOLA! from Spain this week ahead of its publication on the occasion of the wedding of Princess Victoria of Sweden and Daniel Westling and is already on sale Monday. A memorable number with all the details of this link and the party prior to this royal wedding.
You can see all the guests wore costumes and for this important event in Stockholm will go down in history. You can also enjoy the images of the Queen, thePrincess of Asturias and the Princesses. Queen Sofia wore a draped gown with embroidered flowers, Margarita Nuez, Letizia a nude chiffon dress embroidered with geranium and rose petals in chiffon and tulle miniclaveles, Felipe Varela, while the Princesses were Lorenzo Caprile, Elena with a suit and overcoat as Goya and style bullfighter Cristina Dona.
Enjoy the glamorous royal pictures and Feelgood

Princess Victoria of Sweden and her fiancé  will also have a sweet and delicious end to their wedding. “Big, white and tasty wedding cake” as the baker  Gunter Koerffer has revealed during the presentation of the Wedding Cake of the People for the royal couple, the other that it can test all Swedes .
Günther Koerffer in the picture with his creation at the Cathedral of Stockholm and the Royal Palace, and his four assistants have been charged in making both cakes.  Günther Koerffer also joined the team of bakers who makes the wedding cake of kings Carlos Gustavo and Silvia in 1976.
The tradition of serving as a dessert cake dates back to the wedding ceremonies of antiquity. Bread is considered to bring good fortune and then to the wedding guests arrived from Greece and Rome.  Then a  medieval French chef who worked at the English Royal Court had the idea to mix bread with powdered sugar to form a high cake. That is how did the wedding cake we know today.
So if you are in Stockholm taste the royal wedding cake of the people
Feelgood 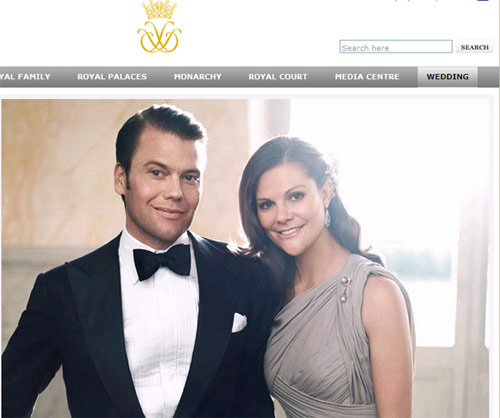 News about the Royal wedding of  Princess Victoria of Sweden with Daniel Westling:

The program will start on Thursday 17 June with a private dinner at the Drottningholm Palace, chaired by King Carl Gustav and Silvia of Sweden, and on Friday 18 June, will be a reception by the Government in the Stockholm City Hall and an evening concert at the Stockholm Concert Hall  to be chaired by the Swedish Parliament.

The big day, Saturday, 19 June, the couple will promise eternal love at 15:30 hours in the Stockholm Cathedral.  After the wedding will follow the parade at the Royal Barge, and finally, the traditional wedding banquet at the Royal Palace in Stockholm.