This is where I come from, A Coruña. The perfect place to enjoy the sea and water activities, like surfing, sailing… In A Coruña, in the north of Spain you will find rugged cliffs, rocky coves, unspoiled beaches, seafaring villages, medieval villages, rivers and a unique natural and ethnographic heritage make up the picture of the Rias Altas in Galicia, the most magical and untamed face of the province of A Coruña.
Not far from the tip of Estaca de Bares is Ortigueira, whose charm lies in its stunning beaches, and, half hidden in the mountains, Cedeira, an important fishing port, seaside location and paradise for surf lovers, especially its Pantin beach. Among the landscape of sharp cliffs – the highest in Europe – you’ll find the city of Ferrol, the charming Pontedeume and the more touristic Sada before reaching the noble A Coruñawith its splendid Atlantic outlook. Inland there are medieval towns such as Betanzos and many testimonies to Galicia’s pilgrim heritage, including the sanctuary of San Andres de Teixido, a symbol of ancient rites which still survive.
You will find more information in the webb  turgalicia.com
Feelgood in A Coruña, Galicia, Spain and enjoy water!

The eastern cuisine normally is not designed to be enjoyed with wine. However, Latin culture is culturally very attached to the consumption of wines at mealtime. It is important then to choose the right wine.
CAVA CHAMPAGNE AND CHINA

In this case, the best option is a sparkling, champagne or cava although not essential pop a cuvée highly rated, a blanc de blancs (chardonnay ) will refresh your meal  without losing their identity flavour.
AROMATIC WHITE DELIGHTS FOR JAPAN

Perhaps the Japanese cuisine is perfectly pairing white wineswith high acidity, such as galician (the Albariño from Rias Baixas, the Valdeorras , the Ribeiro wine fresh.) As for the more complex recipes, such astempura , the teppanyaki or maguro (tuna marinated in spicy), the best option is an aromatic white.
WHITE WITH AGING COMPLEX FOR THAI

The cava and Champagne wines are also ‘off road’ to accompany the cuisines of Southeast Asia: Vietnam, Korea, Thailand, Malaysia … With some remarks: in the case of the kitchen thaï ,  a spanish wine Rioja.
LACQUERED DUCK WITH RED

A red medium-aged (with only three or four months in barrel) is associated with elegance on the grill, Korean style . And even a Mediterranean wine works well with roast duck , the dish “star” in many Chinese restaurants that enrich the culinary agenda.
Do you like oriental food?. Now you know how to combine with wine,
Feelgood

J.Lo has just been to Madrid to promote  the Back up plan. The film is a romantic comedy about a woman who decides to have a child.
The singer and actress has traveled to Spain with her family : her children, sister and nephew.  She  has also been to London, Berlin and Paris and  had time to talk to the media in the capital of Spain, Madrid about her  latest film, as well as her upcoming album Love,  her husband and children .  Marc, her husband is  in Puerto Rico because on Thursday this week he will be givng  a very important prize at the gala of the Latin Billboard Awards.
To the question, how much time she spend a day thinking about fashion, she said:
” It’s part of my life, like music. “, and she is a hard worker too.

She said her new album after Love will be in spanish and that she is a woman  she feels very comfortable with herself.
Feelgood Womanhood
Visit J.Lo site 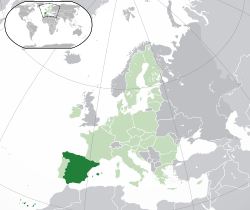 I just want to explain the origins of the name López, my name.
López is a common surname  in the spanish language.  Lopez, the  meaning is Son of Lope and Lope itself is  a Spanish given name  deriving from Latin lupus, meaning wolf. The surname is first attested in the heart of Spain, where the name is  from Latin.
Actually wolf in spanish today is lobo, quite similar.
(location of Spain in Europe in dark green in the picture)
And here comes a bit of history of  Spain´s origins:
Early settlements

The history of human presence in the Iberian Peninsula dates back about 800,000 years after the discovery of Homo antecessor at the site of Atapuerca (Burgos). The most striking evidence of the Palaeolithic is represented by the paintings of the Altamira Cave and the broad spectrum of rock art of the Mediterranean.

Iberians, Celts and Romans
From the first millennium BC, the Iberian peninsula was occupied and colonized by different Celts, Iberians, the Tarshish, Phoenicians, Greeks and Carthaginians, until the arrival of the Romans, whose presence would leave a valuable legacy assets, of which the city of Tarraco is the best example. After the fall of the Roman Empire raids happen Swabians, Vandals and Alans, until the arrival of the Visigoths, who manage to build a strong Hispanic monarchy with its capital in Toledo.
So Wellcome to Misslopez News in Spanish 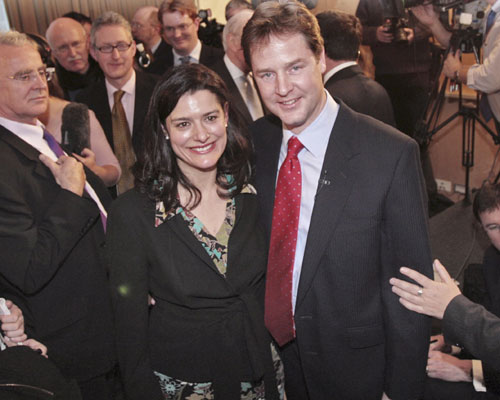 Maybe Britain´s first lady and Prime Minister to be!. Her name is Miriam Gonzalez Durántez and on 6 May could change her London house to live in 10 Downing Street, the residence of the Prime Ministers of Great Britain , and become Britain´s First Lady next May 6.

Her husband, Nick Clegg , is  the leader candidate of the Liberal Party and may become the next prime minister. His party is the third political force in the country and compete in the polls against Gordon Brown , the current prime minister and Labor Party leader, and against the conservative David Cameron.

Miriam is born in Spain,  Olmedo, a town of 4,000 inhabitants close to Valladolid and Madrid. She, a 41 years old lawyer, has become the best support for her husband in his race to win the next general election. The media has been praising her discretion , professionalism and style, perfect for a first lady!.

Miriam has been involved in politics since she  was little because her father, Jose Antonio Gonzalez was mayor of Olmedo, and a politician in Madrid. Her mother, Mercedes Durántez, studied law at the University of Valladolid.

Miriam Gonzalez and Nick Clegg met in Belgium, while studying at  College. At first they spoke to each other in French and then in English, but later Nick, learned Spanish. Miriam keeps in mind that when they first traveled to Spain, they were listening to tapes of  Spanish classes and he had a very funny Mexican accent at the beginning.
Since then everything went smoothly, they got married in 2000 and have now three children Antonio, seven, Alberto, four, and Miguel, one. In an interview for a Spanish paper, El Mundo, Miriam said to be very proud of her origins, saying: “I’m from Olmedo, I’m from Spain and I’m very Castilian and I like it to be because the Spaniards from this region are very austere, noble and loyal. ” In a statement to that newspaper, which also includes the magazine Hola Miriam also said that her husband is “the best man in the world”, but has a flaw: “It’s a total disaster in the kitchen.”