Hello!. What can´t be more Spanish than Diaz and Rodriguez, as surnames?. Well Lopez, maybe? 🙂
Cameron Diaz, the Hollywood actress just had her birthday. The occasion of the meeting Diaz-Rodriguez was the 38th birthday of Cameron that she keeps saying they are just friends. She actually has stopped out of the rumors and told U.S. Weekly: “No, no, no. I’ve been in several relationships since age 16. In the last three years, I have taken the decision not to get into another. I want a relationship with me now. ”
The questions: just friends or more than friends.And you, what do you believe?.
Keep your privacy for yourself and Feelgood 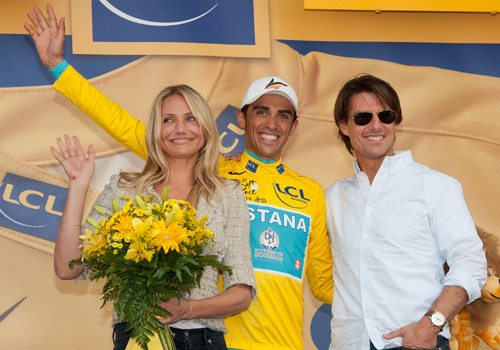 Hi!. Do you know about the Tour de France?.This competition is very popular in France, Spain..I´ll tell you more now!. By the way Spanish Alberto Contador is doing good!.
In their  journey to promote their new film, Cameron Diaz and Tom Cruise have traveled to Bordeaux, France where they have continued as genuine Tour de France fans. The protagonists of Night and Day had the opportunity to get on the podium with the winner of the 18th and penultimate stage: Spanish Alberto Contador. The cyclist, who posed smiling next to these Hollywood stars, gave them a yellow jersey signed each one, plus the actress delivering the traditional bouquet of flowers that the organization offers to the leader of the stage. They wished good luck to Alberto and the rest of the competition. 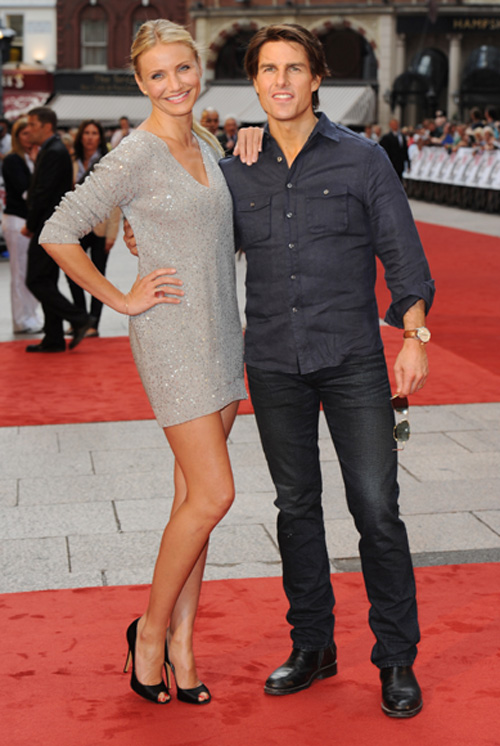 Then Diaz and Cruise were moved from Surrey to London by helicopter to attend the premiere of Night and Day. The actress, 37, wore a silver design of Stella McCartney and Tom, 48, a set of jeans and blue shirt. Cameron Diaz posed with the best of smiles on the red carpet, while Tom Cruise is devoted to photographs and sign autographs for fans who crowded the plaza London’s Leicester Square.
Look she really knows how to wear short dresses!.
I look forward to seeing this film that were shooting in Seville, Spain by the way.
Feelgood Night and Day!

Hi there!. Having mini and showing legs it is not as easy as it sounds. Glowing legs without falling into the vulgar side has a particular style rules.And Cameron seems to know them all. I think she has a balance style that makes her look very classy even in mini dresses. Don´t you think so?
Feelgood showing your legs with style!

Hola amigos !. Today I am going to talk about the latest film of Tom Cruise and Cameron Diaz in Spain.

The highly anticipated world premiere of her film Night and Day, starring Tom Cruise and Cameron Diaz and directed by James Mangold, was last night at the Teatro Lope de Vega de Sevilla. But first, the actors have recreated the scene of one of the film’s chases through the streets of Seville. Tom, standing on a red scooter, and Cameron, driving a silver sports, have an exhibition on wheels, skids including, to a large number of international journalists and onlookers who have gathered around the cathedral, Plaza Virgen de los Reyes and the Plaza del Triunfo. Then the star of Top Gun, although not planned, was signing autographs and taking photos with fans. The arrival of these stars in Hollywood has led to much anticipation and last night many people were waiting at the gates of the Hotel Alfonso XIII, where we could see Cruise off a car with Suri in her arms.
It seems that Tom Cruise likes very much Spain, the land where his last girl friend, the spanish Penelope Cruz actress comes from!.
Feelgood in Spain!

It is just now a rumour … that Cameron Diaz and Alex Rodriguez are more than friends . According to People magazine, both were seen at the hotel’s deluxe suite Liberty in Boston, where the player was staying. A witness has told the publication: “They came to the Massachusetts capital by private jet and went together to the hotel,” and adds that the actress and the player did not separate even for a moment, that did not leave the room during their stay and they even asked for meals in the room.
If it is true, Congratulation!
Very spanish surnames by the way! Diaz and Rodriguez, like Lopez
Feelgood Womanhood